I wanted to stream zip files with lots of JPEGs in. Hundreds of JPEGs from digital cameras and, being as they were JPEGs, didn’t really care about trying to compress them any further.

There are several ruby zip libraries, e.g. rubyzip, zip-ruby and archive-zip - but they seem to fall into two camps: pure ruby with no ZIP64 or wrapping a C library (e.g. libzip) but with no obvious way to create a zip file and start streaming it before it’s complete.

So I indulged my NIH syndrome reflex and wrote zip64writer which streams zip files and can automatically starts using ZIP64 extensions when needed. (I did look at adding ZIP64 support to rubyzip, but I figured fairly quickly that it would be easier to roll a specifically targetted library than adapt it to my needs.)

So writing a zip file to a stream works something like:

ZIP64 extensions are extra header fields, and an extra couple of blocks at the end of the zip file, which allow zip files to contain more than 65,535 entries (the limit of a 16bit integer) & for the zip archives (and the files inside them) to be greater than 4 Gb (the limit of a 32bit integer) in size. 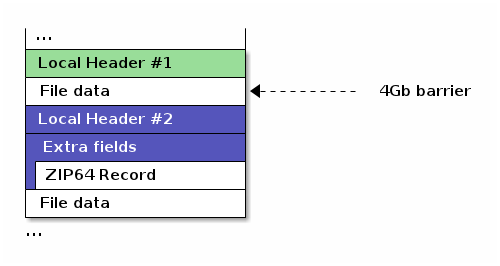 The writer detects when an offset requires a 64bit integer (ie. offset >4Gb) and automatically starts using ZIP64 extensions - so the files are still as compatible as possible with old zip implementations that don’t support ZIP64 (e.g. Windows XP shell).

Basic testing reveals that ZIP64 files created this way (ie. a mix of standard encoding and ZIP64 encoding) work fine on Windows 7, OS X 10.5+. (Also the version of file-roller shipped with Lucid Lynx opens them fine, although the version of zip shipped with Hardy Heron is too old.)